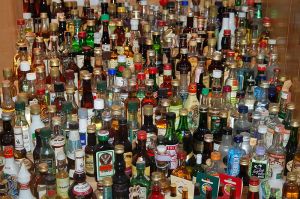 Had a drop too much?

Have you woken up with a dry mouth? A terrible headache? Severe nausea?

You’ve probably got no need to panic, and the likelihood is a coffee, a bacon sandwich and a couple of aspirin will sort you out. Chances are you had too good a night last night and you’re now doubting you’ll be able to leave the house without sunglasses. You don’t need to be a doctor to diagnosis this one – it’s a hangover, the worst of the weekend visitors.

Whether this affliction has followed you for years or if, as you get older, your fresh-faced, leap-out-of-bed attitude is finally catching up with you, most people who’ve had a drink have also had a hangover. And to use a phrase often mumbled from beneath the duvet, “What the hell happened last night?”

END_OF_DOCUMENT_TOKEN_TO_BE_REPLACED

You shall not make for yourself a false iDol

Or should that be a fully lowercase idol? If you’re so wrapped up in your new technology you haven’t got time to confess the answer may have arrived – in the form of the Roman Catholic-approved iPhone, iPod and iPad App ‘Confession’, available for the bargain price of £1.19.

The developers, Little iApps, have achieved fame by having the first app sanctioned by the church. They told Reuters they wanted everyone to have a “personalised examination of conscience”.

The religious user is led through the sacrament, a number of questions designed to help them keep track of their sins, and to help them prepare for the Rite of Penance. It also takes into account their sex, marital status and age.

END_OF_DOCUMENT_TOKEN_TO_BE_REPLACED

In praise of irreverent research

My last post reminded me that I have yet to say or write anything about a recent set of scientific prizes – yeah, yeah, the Nobels, we know all about them. But what about the Ig Nobels? For those who don’t have a clue what I’m on about – these are the prizes awarded by The Annals of Improbable Research. The prizes, and improbable research itself, are dedicated to work that first of all makes you laugh, and then makes you think. And they really do.

I’ve been a huge fan of these awards since I became aware of them in 2007, when I went to watch the Ig Nobels ‘on tour’ in London. Sitting in a room full of scientists at an evening to celebrate award-winning research you might expect a series of long and boring lectures about seemingly tedious research into a tiny incremental change in something-or-another, or a newly discovered whatdyumacallit. Nope. I got woodpeckers and head injuries, a teenager repellant and evidence that female mosquitos like the smell of Limburger cheese.

That intriguing bunch weren’t the only winners; other highlights of the 2006 Ig Nobels were studies into why we hate the sound of fingers down a blackboard, how to get the perfect blink-free photo and an ingenious method of curing a the hiccups.

So what craziness has been going on this year then?

END_OF_DOCUMENT_TOKEN_TO_BE_REPLACED

Are scientists a little punch drunk?

When I saw this piece on the New Scientist website I was obviously intrigued. A headline about a robot punching people? Under the guise of it being in line with Isaac Asimov‘s rules? Asimov has written huge numbers of books exploring the interaction of robots and humans, including I, Robot, but didn’t he say a robot could never hurt a human? What was going on here… I clicked on (I was, in fact, so intrigued that I was spurred into subscribing – something I’ve been meaning to do but never quite got round to. Anyway, I digress).

As I read on, I was captivated; this is a perfect science story – someone doing something that seems a bit whacky, but there’s an underlying purpose to it all. I can tell by now you’re as intrigued as me… why are some Slovenian scientists getting robots to punch their friends? The suspense is almost unbearable, I’m sure.

END_OF_DOCUMENT_TOKEN_TO_BE_REPLACED

You are currently browsing the Science news category at Bek's Files.